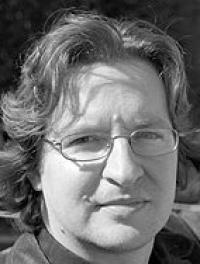 Theodor Burkali was born in 1975 in Györ, Hungary. He studied clarinet under Béla Kovács at the Franz Liszt Music Academy in Budapest and graduated in 1999. He continued his clarinet studies at the Mozarteum in Salzburg, graduating in 2001. He obtained his doctorate in musicology in 2005, also in Salzburg. He attended master classes in composition with Giya Kanchelli, Franco Donatoni, László Draskóczi, and Fekete-Györ István.

As clarinetist and composer Burkali has worked at the Concertgebouw Amsterdam, at the Vienna Konzerthaus, at Queen‘s Hall Edinburgh, at the Großes Festspielhaus Salzburg, and at Symphony Space New York. He also participates at the leading festivals for contemporary music. His participation in concert, radio, and television productions have led him to various European destinations, South Africa, Asia, and the USA. Since 2008 Burkali has been a member of the OENM (Österreichisches Ensemble für Neue Musik).

In 2001 Burkali was selected as an active participant at the Académie de musique du XXe siècle in Paris, occasioning him to work with the Ensemble Intercontemporain under conductors Jonathan Nott and Myung-Whun Chung.

As early as 1993 he was awarded the prize Junger Komponist des Monats (Young Composer of the Month) by the Hungarion radio and television. In the following years he received numerous further awards and fellowships, such as the special prize by the music publisher Boosey & Hawkes (1998), the Förderpreis of the Theodor Körner Stiftung (2002), the prize of the German Schallplattenkritik in 2007 (as a member of OENM), and a working fellowship in 2010 by the Österreichisches Bundesministerium zur Förderung der Kompositionstätigkeit (Austrian Ministry for the Furtherance of Compositional Activity).